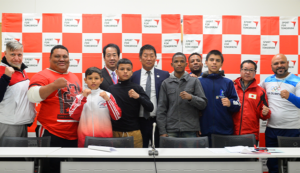 Promising young athletes are now more motivated than ever to strive toward a medal in the future, following a boxing training session held at the National Training Centre in Tokyo from 22-26 December 2019.

The training session was organised as part of Sport for Tomorrow programme (a Government of Japan initiative first introduced at the beginning of the Tokyo 2020 presentation), by the Japan Boxing Federation (JBF), in conjunction with the Japan Sport Council (JSC) and the Japanese Olympic Committee (JOC).

During the five-day programme, junior boxers and coaches from four countries (Costa Rica, Dominican Republic, Guatemala and Nicaragua) were provided training and technical assistance by Japanese national trainers, seeking to improve their methods of providing training and coaching. Japanese junior athletes of around the same age (12 to 15) took part in a joint training session with foreign participants, inspiring them and enriching the learning environment. The participants in the programme were also exposed to Japanese culture, watching a morning sumo (the national sport) training session and national boxing tournaments to deepen understanding of Japanese sports initiatives.

The Caribbean and Latin America region has made substantive progress over the past two decades. However, on a recent visit to the region, Mr Watanabe witnessed firsthand that there still remain many disadvantaged and excluded girls and boys. The four countries were chosen because athletes from those countries had not had the opportunity to explore their potential outside of their region. 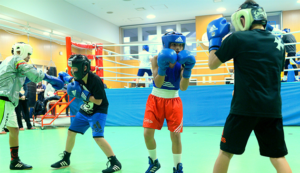 Drawing attention to a number of challenges and developments that appear to have occurred in the boxing environment, chair of the IOC’s Boxing Task Force, Mr Morinari Watanabe, commented at the press conference:
“Since being assigned to the post of Chairman of the Boxing Task Force in June, I have visited the region myself as part of a hands-on approach and thought about what needed to be done. When I was travelling around Central America, I saw boxers training very hard, but in many cases, their training environment could have been better. By providing such children with an opportunity to visit Japan, I hoped that it would be a massive inspiration to Japanese boxers as well. Having everything can be a strength, but also a weakness. And being in need can make you strong in some areas, but weak in others. I believe that having the two groups from different backgrounds interacting with each other will raise the level of competition, and sport in general will prosper.”

For the first time ever, the Japan Boxing Federation welcomed athletes from overseas and took the lead on the joint training programme. Practising and fighting against overseas athletes gave the Japanese athletes an irreplaceable experience and confidence.

“It was a valuable lesson for us, watching the foreign boxers train. The physical ability of the boxers was impressive, and we learnt that there are a variety of coaching methods in different countries. The Japanese boxers seemed to be nervous, even just talking to the foreign boxers, but I think this kind of exchange program will be a valuable experience in their development”, said Mr Sadanobu Uchida, president of the Japan Boxing Federation.

Mr Bryan Mercado Garcia from Nicaragua, who had met Mr Watanabe when he was helping his family business at a local market in Nicaragua in September, said: “I have been champion four times in domestic tournaments, but this was the first time for me to fight in a different country. My goal is to become champion in the Caribbean region, and to win a gold medal at the 2024 Olympic Games in Paris”.

Another of the young athletes, Mr Gabriel Mata Araya Jesus from Costa Rica, said, “It was my first time to travel to another country. It was wonderful to have had the opportunity to train with everyone else from different countries in Central America. My dream is to compete in the Olympic Games and win a medal, then to become World Champion”. 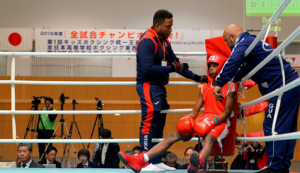 The training and exchange programme concluded with a friendly match against Japanese training partners in front of a large audience in the presence of Ms Seiko Hashimoto, Minister for the Tokyo Olympic and Paralympic Games and Mr Yasutoshi Nishimura, Minister of State for Economic and Fiscal Policy.