Sport for Tomorrow (SFT) launched a short film featuring Japanese initiatives toward the achievement of an inclusive society through parasport today to coincide with the opening of the Tokyo 2020 Paralympic Games. Commissioned by the Japan Sports Agency, and produced by the Sport for Tomorrow Consortium, the film aims to promote the Paralympic movement and human rights movement for people with disabilities.

The film follows legendary Japanese Paralympian Atsushi Yamamoto, and tells the extraordinary stories of future para athletes, supported by SFT projects in developing countries, aiming to participate in the Tokyo 2020 Paralympic Games for the first time. We see the athletes grow mentally and develop as individuals through various parasport experiences. 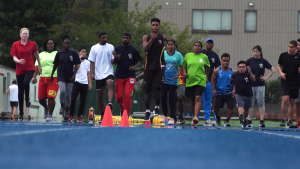 Ken Kahu of Vanuatu became the first Pacific para athlete to pre-qualify on merit. With the support of the SFT Expansion of Paralympic Participants (NEPP) project implemented by Nippon Sports and Science University (NSSU), not only did he develop as a para athlete, he also felt change within. “When I began training, I quickly realised that I loved sport. Sport has provided me with many good opportunities in life. It has changed my life.” Although Vanuatu withdrew from the Tokyo 2020 Paralympic Games due to COVID-19, the President of Vanuatu Paralympic Committee, Margaret Macfarlane emphasized “The journey to Tokyo has given our para athletes and all those living in Vanuatu with an impairment a voice through the powerful platform of inclusive sport to bring about meaningful change.”

Chimi Dema, who will be representing Bhutan as the country’s first female para athlete at the Tokyo 2020 Paralympics Games, also talks about how she has changed since her introduction to parasport. “The best thing that happened to me through sports is I gained self-confidence, and I would encourage people with a disability to take up sports.” The story of her Paralympic journey is also available at Paralympic news.
https://www.paralympic.org/feature/bhutan-para-athletes-out-make-history-paralympic-debut

The film also features SFT grassroot activities in schools and communities in developing countries, and inspires people to change the way the world thinks about disability, diversity and human potential.

The outbreak of war in Yemen in 2015 increased the challenges faced by women with disabilities and saw them lose their basic rights, which led to their becoming completely isolated from society. Amal Haza’a Ali Munassar, Assistant Secretary General of the Yemen Paralympic Committee demonstrates the true power of resilience with the establishment of a women’s wheelchair basketball team. “This program has made a good impression on Yemeni society and is also a good start to such programs in the country. Through the program, we have made great achievements, with the players showing their ability and skills on and off the court.”
https://www.paralympic.org/feature/yemen-battling-all-odds-end-29-year-wait

Efforts by those such as the National Paralympic Committee of Zambia, which provides I’mPOSSIBLE Paralympic education in schools with the support of the Japanese Paralympic Committee and the IPC, are spreading not only in Africa, but around the world.
Toward a Vibrant and Symbiotic Society, JICA volunteers, Japanese NGOs and private companies in many countries support people with disabilities through sports. 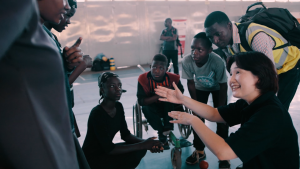 ###
Sport for Tomorrow (SFT) is an international contribution initiative instigated by the Government of Japan at the IOC Session on the occasion of Tokyo’s bid for the 2020 Summer Olympic and Paralympic Games. SFT aims to spread sporting values and the Olympic and Paralympic Movement to more than 10 million people in over 100 countries, and has already achieved its goals as of today.